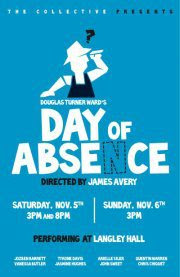 Back when I was a young innocent, and ignorant young woman, college student at Oberlin, I had the opportunity to see the live performance of this Play. Now you can see the play in its entirety on youtube!

The time is now. Play opens in unnamed Southern town of medium
population on a somnolent cracker morning — meaning no matter the early
temperature, it’s gonna get hot. The hamlet
is just beginning to rouse itself from
the sleepy lassitude of night.

from the dramitists.com website:
Winner of the coveted Vernon Rice and Obie Awards. Coupled with HAPPY ENDING in its successful Off-Broadway production, this clever and enormously amusing satire is described by the author as “A Reverse Minstrel Show. “Here the all-black cast, made up in white face, recount the uproarious emergencies which occur when a Southern town is faced with the sudden and inexplicable disappearance of all its black citizens. “Laughter can be as effective as anger in telling white America what [Douglas Turner Ward] has on his mind.” —NY Times. “…a gust of fresh air among racial plays.” —Life Magazine.

THE STORY: DAY OF ABSENCE. A satire about an imaginary Southern town where all the black people have suddenly disappeared The only ones left are sick and lying in hospital beds, refusing to get well. Infants are crying because they are being tended to by strange parents. The Mayor pleads for the President, Governor, and the NAACP to send him “a jackpot of jigaboos.” On a nationwide radio network he calls on the blacks, wherever they are, to come back. He shows them the cloths with which they wash cars and the brushes with which they shine shoes as sentimental reminders of the goodies that await them. In the end the blacks begin to reappear, as mysteriously as they had vanished, and the white community, sobered by what has transpired, breathes a sigh of relief at the return of the rather uneasy status quo. What will happen next is left unsaid, but the suggestion is strong that things will never quite be the same again.

Here is the play in its entirety!

I want to suggest that we do the same thing with our dollars. When I was at Oberlin College, they were going to discontinue the Black Studies Program. I had the idea that if we jammed the computer system at the Library, they will reverse this action. So, we sent students to all of the library branches, and were each instructed to check out 20 books, then immediately return them . We crashed the system!  Later that evening, we held a candlelight vigil around the President’s Home. The next day, someone had made an anonymous donation to keep the position open.

It worked once, it can work again!

It is a well known fact that back in the day, WE were the currency, the collateral, the stock. WE are the reason for Wall Street, where the slaves were being auctioned off, THEY BUILT A WALL so that the citizens did not have to see it.

TOGETHER, WE CAN MAKE OUR BLACK DOLLARS VANISH FROM THE OPPRESSIVE SOCIETY AND ECONOMIC STRUCTURES.  That is my two cents. enjoy the play.  InJoy Your Day!

Here is a spoof, called Negro Town: “You CAN WEAR YOUR HOODIE AND NOT GET SHOT!” LOL!! This would be even better than Boycott Black Friday…

As recently as 2004, director Sergio Arau gave us “A Day without a Mexican.” It has almost an identical premise (without attributing any credit to Ward), except this film is about modern day Mexican residents of California, instead of black people in the south.

lets make our absence felt with our dollars! on Black Friday and EVERYDAY!!