Feather of Maat is Here to Purify Our Lives:
Sun in Sidereal Libra Day 3.

I am sure that many of you believe that we are now in the last few days in the sign of Libra, with the Sun on the way to Scorpio. This is a HeruScope Reading, which is based upon the actual motion of the Sun and the Planets across the Constellations along the Ecliptic, the Zodiac.. That is not the case with the Western/Babylonian system. I will not go into that here. There are many other posts here at tchiya.com that can bring you up to speed.

Onto the Celestial Event.

On October 31, every year, Ra moves into Maat, Ra Maat. Or, the Sun moves into Sidereal Libra. The sign of Sidereal Virgo, Aspolia, is 45 days long. It is a huge constellation. We have 45 days to put things in order, to plant seeds for the Fall Garden of Our Lives. And now, we have 3 weeks of balance, peace, and harmony. Three weeks of the Cosmic Force known as the Goddess Maat.  Maat symbolizes Balance, Truth, Order, Harmony, Justice, Reciprocity, and Righteousness. For more information, visit the NEW Page of Maat at tchiya.com.

Let’s begin with the HeruScopes Process Step 1: GET CHART FROM ASTROLOGY13.COM

Here is one from October 31, when I had every INTENTION of getting this report to you… 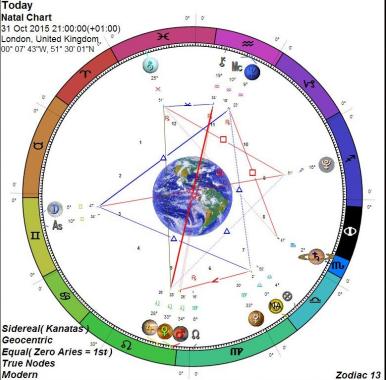 The symmetry reflected in this chart for the first Day of Maat, 2015 is breathtaking. I even see a pyramid in the center of the chart. All of the Cosmic Forces are in balance and harmony. This is a very good sign for us living on the Earth. After that long intense purification from the time of Aspolia, Virgo, planting seeds of good intention and preparing for the Planting for the Fall Garden of our Lives. Now we can enjoy the time of nurturing our goals, plans and intentions. We can also “enjoy” the many battles and struggles we will inevitably face.

First thing I notice is the beautiful pyramid: Sesheta PiCot Mahi (Moon in Gemini), Ra Maat (Sun in LIbra) and NebtHet KuUrKu (Neptune in Aquarius). If you recall just last week, I was writing about the Dagger in the Heart of the Mother Lioness, about the Leo Conjunction of Venus, Mars and Jupiter? Well, this is totally opposite! Whoo Hoo!!! This Rising of October 31, I was again awakened by the stars! I went out to take a photo, this is what I saw….I really must get a better camera.

The first photo is the Moon and SIRIUS, in alignment with the Leo Conjunction. It made a straight line across the sky. The second photo is of the Leo Conjunction again, but this time, I SAW A FEATHER INSTEAD OF A DAGGER. It was incredible. It was a totally different energy! AND TIME! This was the moment when Ra moved into Maat (Libra) and the Moon was in Taurus according to NASA, Sesheta Apis, R U SIRIUS?

Yes, I AM! I am Sirius Enuff! The feelings and emotions that came up for me at that moment were, and still are hard to describe. The feeling was so overpowering, that I was not even able to process and write about until now. After the major cleansing that went on the previous week, with the Leo Conjunction, I felt that my heart had been purified, my heart was as light as a feather, years of trauma had been released, and I was filled with love and gratitude for all life, for every violation and adversity, because I had not been defeated. Slowed down a bit, ruffed up a bit, yet, still standing. AND, feeling empowered to take right action, confident that my words and actions are now in alignment, and no need to fear speaking my truth any longer. These are some of the feelings and thoughts, SAA, that flooded my consciousness in that moment. My camera (KaMerRa! Ha!!) does not do justice to the precious moment, Of course, it has rained every night since.

Ra Maat, Sesheta PiMahi, NebtHet KuUrKu. This pyramid sets the tone for the entire month of Maat, which is from October 31 to November 23, then we will have 6.5 days of Ip, Scorpio.

Ra Maat: Use your creativity to Restore Maat. To Reflect Maat, To LIve with Maat.

(for more info on Maat, visit the   Hall of Maat at tchiya.com)

this hekau (chant) is from the Temple of Aset Temple of Shetaut Neter.

Sesheta PiMahi. The Moon Goddess in the Sign of the Lovers, The Twin Stars Pollux and Castor.  (In the Olmec tradition, Gemini is a Sacred Basketball Court!) Sesheta is the Scribe, the Architect, The Divine Engineer that works with Sacred Geometry.  She is the Lady of Books, the Goddess of Astrology, Mathematics, the Sciences, etc. She is the female counterpart of Djehuty, and in fact, taught him the Medu Neter! She is my Office Manager, Accountant, and takes care of my legal documents, contracts, anything in writing.
DUA SESHETA!

Sesheta PiMahi Ra Maat. This is also the time known as the Time of the Ancestors, because the portal is opened until the Middle of Winter, around February 5. This signifies a great time for building greater communications with the Divine Self, and with the Ancestors. Now is the time for the right actions that will bring you closer into alignment with Maat, with the Divine Principles.

Sesheta PiMahi represnts the Cosmic Force that we need to BUILD and MAINTAIN the vibration of the pyramid in the astology13 chart above.  The Divine Power of LOVE that will keep all the forces in alignment. It is a CELESTIAL MERKABA, and our job is to recreate this here on Earth, in our lives. I don’t mean go out a build a pyramid! I am thinking more about what is called the MerKaBa. Love/Light Spirit Soul.

This is NOT a page abut Merkaba, there are many places onlinefor you to get acquainted. Try not to get distracted by who is presenting the teachings, and just see how to apply the teachings to your own life. You do not need to know the complicated techniques however, so I am not even going to list them. Just visualize two pyramids of light around your being. (they only use a 3 dimensional pyramid for some reason…) One goes above, and one goes below, into the Earth so to speak, for grounding. The one that points to the sky is [considered Masculine, and rotates to the right, clockwise, for manifesting. The one that goes into the Earth is considered to be Feminine, and she spins to the left, counterclockwise, the direction for removing blocks and toxins. Now visualize them spinning at same time,in opposite directions. Put up your Merkaba as a shield of love and light for protection.

This is the from Libra reading from astrology13.com from October 31, the Day the Sun moved….

The place of the Moon in Gemini is really crucial for this image because it gives form to this equilibrium with its presence. This is not happening by chance! The Moon is contributing to our daily psychology by changing position every day it causes many problems or it gives solutions in a quite impulsive way. One may not count on the Moon’s stability and reliability to build a new relationship or start a new job. But the Moon shows with its mobility that everything is changing in real life whether we want it or not! Now the Moon gives the initial boost to a new Libra – balance period in the middle of Autumn and this is a message to keep in our minds!

On November 11, will be the New Moon. Dua Sesheta. We will experience another Triple Conjunction Event:  Ra, Sesheta and Djehuty. All in Maat.

I have written at length about the Dagger in the Heart of the Mother Lioness: Leo Conjunction involving Venus, Mars and Jupiter.

There is also an episode of the Self Care Webinar Series:

It was beyond an obsession, because this alignment literally woke me up and made me go outside for a dose of celestial medicine. This entire event with Venus Retrograde and the Leo Conjunction and All is a Moment in My Life that I shall always remember. And, if I ever forget, it is well documented here on my blogs and social media! The Portal Of HetHeru was opened, and so was my Heart.  I also “Rose in Love” (no more falling in love for me!)  with Celestial Photography, now I am Siriusly going to get a modern day computerized telescope and camera to take MUCH better photos of these celestial events. I still have a telescope in the basement in Chicago that I built when I was in college, and never got to see if it works!!! LOL!!!

Anyway, it appears that Mars and Venus, HetHeru and Set are preparing to leave Sekhmet and Amun (Jupiter) as they are heading into Virgo (Aspolia). The point is that their conjunction is continuing even as they are moving forward. This is another indication of the tremendous amount of love and balance and harmony that we are to experience. Practical, Earthy,  planting seeds of intention, preparation for time of Maat, etc…

On another level, HetHeru has made it out of the season of Sekhmet. She is back to her senses, back on course, back on track, the war is over for now. Same with Set:  He has been fighting against his own self, the Ego, and has come out victorious. Now as we enter into Ra Maat, a tremendous sense of peace and balance will cover the land. The planets are also affected by these changes in ANGLES/ANGELS of their own relationships to one another. all of this is felt and reflected in our expressions and in our relationships.

Portal of Heru (Uranus) is still open in PiCot Sahu (Pisces), RePhan is in Ip until December, and is Retrograde! Djehuty is left alone in Aspolia, oh wait, NOT. Here comes HetHeru and Set, so this will be fun to watch as things develop. Asar (Pluto) is in Picot Maere (Sagittarius).

Have discussed all of these transits in previous messages.

The last thing I want to discuss is the Pinnacle, or the Capstone, of the Pyramid of the Chart. NebtHet KuUrKu:  Neptune in Aquarius. Have diascussed this in detail as well, as this planet is not going anywhere for awhile.  The message I am getting is that we are supposed to use WATER in our Creativity to Express Maat. Use the sound of Water as we communicate our feelings, thoughts and emotions. (Moon in Gemini). That WATER is the main element to be working with for the RaMaat Sesheta PiCot Mahi and NebtHet KuUrKu Healing Pyramid of this Maatical Moment from October 31-November 23, 2015. Learn how to use the Love and Light Power of the MerKaBa for prayers, and protection.  Align with the power of Hetheru and Set, two of the most powerful and most feared of all the Neteru, to remain i a joyfil, grateful state of Divinity. And yet, have no fear of calling on Sekhmet if need be!

The Next KemeTones© Self Care with Blue Lotus Speaks is on Monday November 9, just a few days before the New Moon. The subject will be: SELF HEALING WITH WATER!!! LOL!! Looking forward to connecting with you on the webinar! Every OTHER Monday at 5 pm pacific.

self care replays at tchiya.com

GO TO THIS LINK TO JOIN ONLINE
https://www.blogtalkradio.com/shetautneter/2015/10/18/shetaut- neter-sunday-morning-devotional-worship
OR CALL IN TO LISTEN:
Call in number: 347-539-5525