Comfrey is one of the main ingredients in the Dr. Christopher Bone, Flesh and Cartilage Formula. (Also known as BF&C, Bone Formula or Regeneration Tea) This Bone Formula is in many of the TeaChiya Medicinal Salves. Dr. Christopher came up with this formula when a mother came into his office with her teenage daughter. The daughter had a strange skin condition, that conventional doctors had given up on, and had given her a week to live. He describes it as gruesome: the flesh was literally falling off of her bones. He said he was horrified, and had no idea what to say to the mother. He tried really hard to not show his emotions, and prayed to God for something to say to this woman. What came to him was the now infamous BF&C Formula. He wrote it down, told her to “Try This” and handed her the piece of paper. The mother and daughter returned a week later, and the condition had improved! By the end of a few months, the young girl was back to her normal state of health! Many of my friends and clients, as well as myself, have also had amazing results with the BF&C Formula. Some are even miraculous. Now that the formula is included in some of the TeaChiya line of Light Being Wellness Products, I decided it was time to investigate further into the healing properties of the individual herbs and learn why the TeaChiya Salves are so effective. 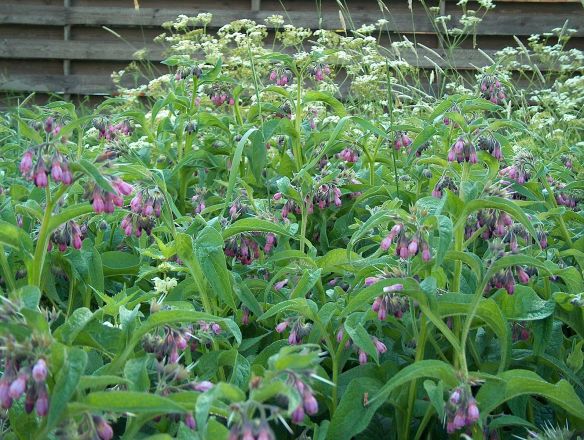 So, let us begin this wellness journey with COMFREY…..

People have been using this herb for generations. Some call it a folk remedy. Native Americans called it “Knit Bone”. One thing that I did not know is that Comfrey is related to Borage, which is a blood purifier and helps make yummy breast milk.

From Mountain Rose Herbs:
Comfrey leaf has been used since Roman times, dating back thousands of years. This herb has been utilized in folk medicine throughout Europe and North America and has been widely cultivated. Much debate surrounds the safety of comfrey due to various parts and preparations containing potentially toxic alkaloids. It is important to understand that the part used, species, and time of harvest all come in to play when determining the safety of this herb. A large body of traditional use supports its safety and efficacy if used intelligently and cautiously. 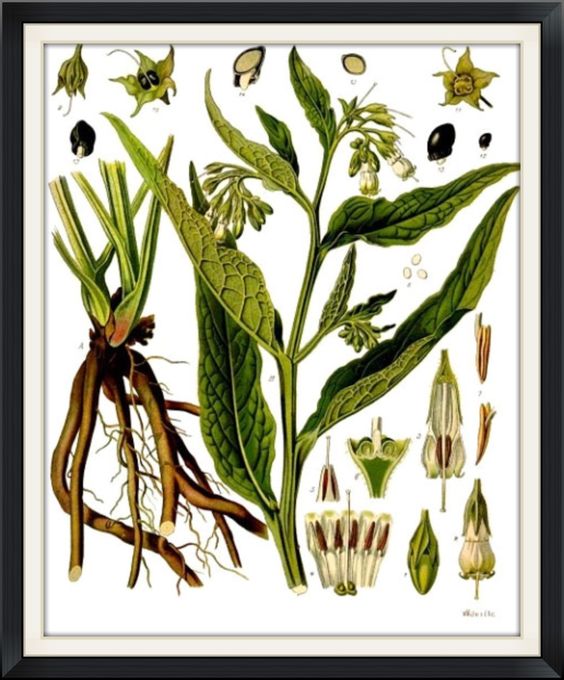 COMFREY TEA HEALTH BENEFITS
Comfrey root and comfrey leaf benefits are widely promoted because of the herb’s long history of use. These rumored benefits include: 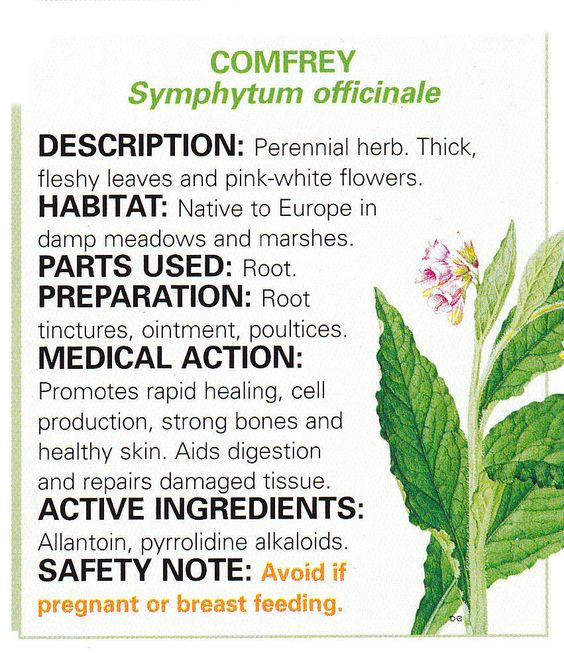 Now this next website has more information on the “scientific study”. Here are some excerpts: Is It Safe to Use Comfrey?

Comfrey is Banned in Foodstuffs
Let’s start with comfrey’s status as a banned herb in South Africa as reported by one of our daily newspapers. Fact is, it is banned as an ingredient in foodstuffs. Yes that is right, you may not sell a foodstuff containing comfrey. And if you are into legal stuff then please read Regulation R1541 dated 13 December 2002 in terms of Act 54 of 1972 to see if there is any mention of growing it, having it, making a poultice or ointment, or any of the other ‘banned’ things as hyped up by the media.

The reason for its ban as a foodstuff ingredient is simple. Comfrey contains a class of substances called pyrrolizidine alkoloids or PA’s for short. Under certain conditions they apparently can cause the destruction of liver tissue by creating a condition known as hepatic veno-occlusive disease (HVOD), in which the cells lining the veins in the liver proliferate and choke off the veins.

Are You Human or a Rat?
So in comes our scientific method. To proof, or disproof, this to be the case, researchers fed a bunch of infant lab rats a diet of comfrey, twenty-eight times their body weight, over a period of nine weeks. During this time they were also injected isolated comfrey extracts. When the poor infants perished it was discovered that they did indeed had HVOD and, lo and behold, it was proven that comfrey was the cause.

Now since policy and law makers think that our human metabolism is identical to that of the rat which is susceptible to these PA’s, and not to that of the sheep which is resistant to PA’s, they had no choice but to take this scientific research seriously. The fact that you and I, as humans, would have to eat somewhere in the region of 80 comfrey leaves every single day for a period of nine weeks, to produce a similar ‘human experiment’ is of no importance.

THANK YOU FOR THAT. I have the same feelings about this so called scientific study. We are NOT rats, and who would eat 80 leaves per day for 9 weeks? 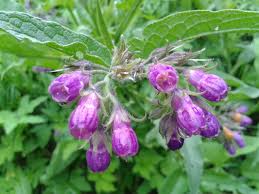 The author goes on to state that since 1980’s, there have been 4 cases of toxicity, each one involving basically overdosing: drinking ten cups a day plus taking capsules, also taking other pharmaceuticals and other health issues that probably contributed to the issues. The article also states that BEFORE THE 1980’S THERE WERE NO REPORTED INSTANCES OF TOXICITY! Which explains why the medical industry and FDA decided to conduct these tests on rats…..

Basically, anything that works naturally, the medical industrial complex will do their very best to discredit or ban the product. Then they will say that their artificial version is better. This of course we already know leads to side affects and a lifetime of addiction to harmful substances.

SimpleUnhookedLiving.com has lots more detailed info on the scientific studies

Elderly woman corrects anemic blood with comfrey. Emsie du Plessis, 78, was among the comfrey eaters in the Doubleday trials conducted by Dr. Clare Anderson. After feeling weak and dizzy in her garden one day, she went to the doctor who said she was a bit anemic. Ms du Plessis began consuming three to four leaves of raw comfrey every day, and when she went back for a checkup a few weeks later, the doctor said her blood was perfect.

89 year-old comfrey user claims MD says he’s in perfect health. In 1991 Andrew Hughes, a comfrey user, published Comfrey, Nature’s Healing Herb and Health Food, which includes anecdotal stories of the benefits of ingesting comfrey. The 89-year old Hughes had been taking from 85 to 135 grams of comfrey in tablet form daily for 28 years, at the time of writing, and he says his regular check-ups revealed perfect health. Hughes first discovered the power of comfrey in 1956, and upon moving to Japan, became an advocate for it. His efforts led to a comfrey boom in Japan, the plant being widely used by Japanese farmers because it increased productivity enormously.

Australian man’s stock is legendary for its health. Foster Savage, who takes credit for introducing comfrey into Australia in 1954, fed it to his stock in great quantities (and ate quite a bit of it himself.) He found that milk production increased dramatically in his cows, with the bonus of thick cream. He also fed his pigs as much comfrey as they could eat and the quality of his meat became legendary. His butcher remarked that he had never seen pigs with such healthy livers.

I keep reading how sheep are immune to the toxicity, yet the tests were only done on baby rats….. 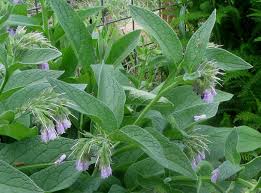 If it is good enough for human babies, then….

from indigo-herbs.co.uk
Research has now shown Comfrey to contain the plant chemicals allantoin and rosmarinic acid. Allantoin is able to accelerate cellular mitosis (meaning it speeds up the process of new tissue growth), while rosmarinic acid helps to relieve pain and inflammation. Allantoin is even part of the developmental process of a fetus – the placenta contains this compound as the baby grows, eventually dwindling as full maturity is reached. Also present in breast milk, a small supply of allantoin continues to be supplied to the baby after birth.

Product labels and websites must post this warning, and so I will as well:

Warning: Contains Comfrey. For external use only. Do not use if pregnant or nursing.

Now isn’t THAT strange: it is already naturally occurring in the placenta, as well as breast milk, and yet, pregnant and nursing mothers are advised to not use it at all?

We are no longer allowed to sell the tonic with Comfrey, but the Tea can still be used for topical applications. Think about it: would the medical industry approve of something called knitbone? For THOUSANDS OF YEARS??? Pinhole glasses were banned for 25 years in the US by the FDA….I can think of another powerful herb that has also been negatively portrayed by the medical industry and the FDA….and now that it has been legalized, the pharmaceuticals only want us to buy it from them, a synthetic version of course!!!

The FDA has tried to make people afraid to ingest Comfrey. They isolated a few elements, then tested on rats, and said it was unsafe for humans even though humans have used this herb for thousands of years. And yet, the same people that tell us this little plant is dangerous, are the same people selling invasive techniques and deadly pharmaceuticals for their profit, not caring about our safety. Such hypocrites. If you are really concerned, then we suggest you also do a liver flush when using the herb, which we should all be doing any ole way… 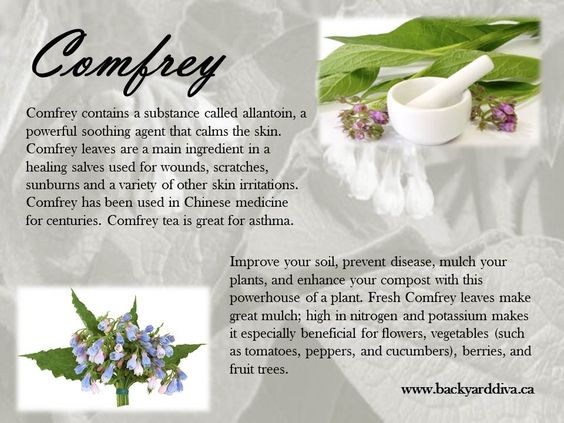 It appears that the main ingredient in Comfrey, the Allatoin, that is responsible for the powerful healing, mending, growing, great feeling on the skin, etc, is the ingredient that was isolated and overfed to baby rats, and they say is what causes liver damage and cancer. They do NOT mention the fact that the rats were fed the equivalent of 80 leaves a day for 9 weeks! WOW. Mindblown….

Here is a comment from another website:
Straight shooting from the hip Didi, Australia & the USA are world leaders in banning the ‘good stuff’. In Oz you are allowed to buy borage, as a vegetable in a restuarant, yet it is banned as a herb, it’s ok to eat as food but not as a herb?
Comfrey is often eaten in our home, we add a cut up leaf or two to many dishes, we add it to the mince or stew or meal once we remove the pot from the stove or turn the heat off.

I occasionally drink the Tonic, although not everyday. Not because of fear, I just forget! LOL!! 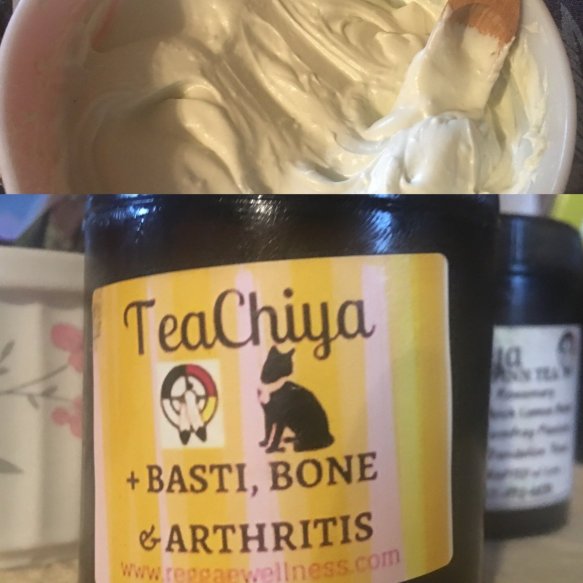 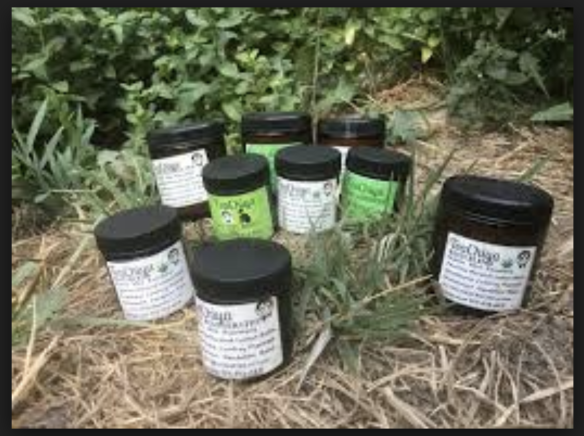 TeaChiya: a natural blend of wildcrafted and native herbs found in the
Waya Equoni Medicine Wheel Garden at the California Mountain home of Tchiya Amet. This blend includes:

We now carry formulas for Bone, Arthritis, Skin, with Cannabis Infusion and without. The most popular formula contains everything!

You can purchase this amazing salve online and also in person at special events, mobile clinics, at The Black Mall (533 E 79th Street) or here at the Light Being Wellness Center in Chicago 8008 S. Ellis Ave #2. Stay Tuned for grand opening of the brand new lightbeingwellness.com website for more information and for placing your order. You can just email me at lightbeingwellness at gmail.com, or call at 707-972-6831

Privacy Policy Terms of Use
Manage Cookie Consent
To provide the best experiences, we use technologies like cookies to store and/or access device information. Consenting to these technologies will allow us to process data such as browsing behavior or unique IDs on this site. Not consenting or withdrawing consent, may adversely affect certain features and functions.
Manage options Manage services Manage vendors Read more about these purposes
View preferences
{title} {title} {title}